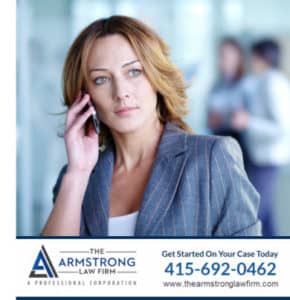 Women face considerable gender inequality in the workplace. This is particularly evident when looking at the adversity women face in attaining and succeeding in executive- and management-level positions. When women obtain professional success, they do not become immune to gender discrimination and sexual harassment. In fact, issues of discrimination and harassment may become more pronounced for women in executive positions.

Successful women are often apprehensive about reporting incidents of sexual harassment and discrimination for fear of being retaliated against, having their reputations damaged, and having the careers they worked so hard for to be damaged. However, the law provides considerable protections against discrimination and sexual harassment, and it is unlawful for employers to retaliate against individuals for complaining about these issues.

Get a free consultation with an excellent female attorney to fight for you.

Female managers and executives may be in the best position to change the status quo and alleviate discriminatory practices in their workplaces. Female executives should lead the way for other women who face adversity in the workforce by standing against discrimination and sexual harassment. They can do so by invoking their legal rights and taking legal action against unlawful employment practices. Until women start having the courage to come forward, male-dominated industries will continue to engage in tactics to deter woman from professional success and they will perpetuate work environments where sexual harassment is business as usual.

In nearly all levels of education, women earn the majority of degrees.[1] This includes graduate-level degrees.[2] However, women occupy only 3.6 percent of CEO positions in Fortune 500 companies.[3] More broadly, women occupy significantly fewer official and manager positions then men. For example, the U.S. Equal Employment Opportunity Commission reported that in 2002 only 36.4 percent of private sector officials and managers were females.[4] In comparison, 80.3 percent of clerical workers were women.[5] Notably, women made up 48 percent of the workforce surveyed.[6] Although the number of female officials and managers has increased over time, considerable disparity remains.

Women continue to experience significant wage discrepancies. In 2009, the median weekly earnings for women were 77 percent of the median weekly earnings of men.[7] This number does not include part-time and part-year employees, which would considerably reduce the median because women are more likely to work limited schedules in order to raise children and perform other caregiving work.[8] Furthermore, women are more concentrated in lower earning businesses and lower earning organizations then men.[9]

It Is Important That Female Executives Take Action

Although female executives have achieved success in their careers, they are not out of harm’s way. In fact, quite the opposite is true: Executive women have been reported as having been harassed at a higher rate than non-executive women.[13] This could be a result of working in male-dominated companies, the efforts of male co-workers to deter professional advancement, being harassed by jealous lower-level employees, or other.[14] Regardless, sexual harassment and gender discrimination is inappropriate, and it is unlawful.

Female executives who have been harassed or discriminated against may have legal recourse, and they should seek redress for their physical, financial, and emotional wrongs done against them. Our San Francisco sexual harassment lawyer is prepared to fight for your right to experience a safe workspace. Additionally, female executives should take action because they are uniquely positioned to stand out against sexual harassment and discrimination. Because of their positions of power, they can have a considerable impact both in terms of changing internal policies and by bringing awareness about gender discrimination and sexual harassment to the public at large.

[4] EEOC, GLASS CEILINGS: THE STATUS OF WOMEN AS OFFICIALS AND MANAGERS IN THE PRIVATE SECTOR 5 (2004)